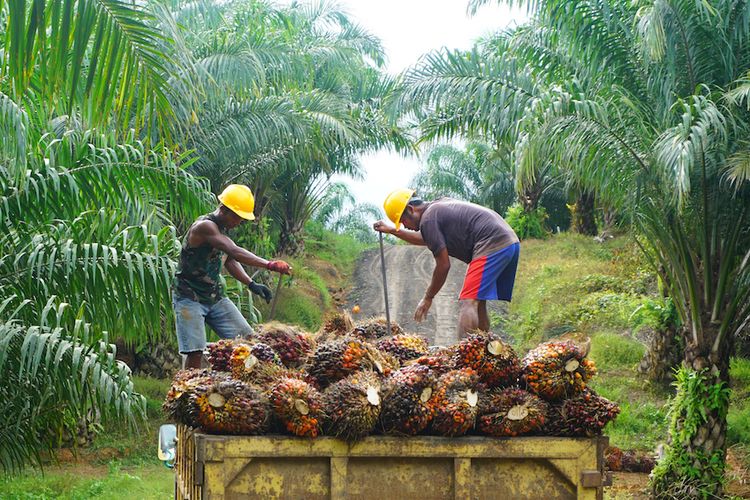 JAKARTA, KOMPAS.com – Indonesia hopes its mandatory biodiesel program will help counter the flak its palm oil industry is taking from media and authorities in the European Union.

Palm oil exports reached $154.9 million in 2019, accounting for 22.4 percent of the country's total exports. But the industry continues to suffer the impact of the black propaganda perpetuated to keep the commodity's price unstable in the export market, according to the Indonesian Oil Palm Estate Fund (BPDP-KS).

“The negative campaign is one of the causes of the low selling price of Indonesian palm oil products,” said BPDP-KS Supervisory Board Chairman Rusman Heriawan during a webinar on Monday, June 29.

The smear campaign, Rusman said, touched on deforestation, a carbon footprint that was considered high, the welfare of the palm oil farmers, and the use of child labor by palm oil companies.

He explained that the palm oil industry contributed significantly to providing job opportunities in Indonesia. The industry has recruited more than 22 million workers from upstream to downstream activities. Of this number, about seven million people work in the upstream sector, while more than 16 million people in the downstream sector, including manpower who are indirectly related to palm oil.

In the effort to fight the smear campaign and to stabilize the crude palm oil (CPO) price, the government has begun to run the mandatory biodiesel program.

The government mandated a 2.5 percent biodiesel mix in 2008 and gradually increased the biofuel content to 7.5 percent in 2010. Later the percentage of biodiesel increased from 10 percent to 15 percent from 2011 to 2015.

Muhammad Saifullah, Acting Assistant Deputy of Plantation and Horticulture at the Coordinating Ministry for Economic Affairs, said that the mandatory biodiesel program can save up to $6.81 billion in foreign exchange reserves and contribute to tax revenues of up to 2.74 trillion rupiahs ($190 million).

“This was implemented under the 2019 program and the ongoing program this year.”

The Indonesian government filed a lawsuit against the European Union for discrimination.

The lawsuit was filed with the World Trade Organization (WTO) after the European Commission approved the Renewable Energy Directives II (RED2) which targets the use of renewable energy in the European Union in 2030.

The lawsuit was filed because last August the European Commission approved the Renewable Energy Directives II (RED2) which targets the use of renewable energy of 32 percent in the European Union in 2030.

RED2 has stipulated that the plants used for biofuel must not originate from deforested areas or are planted on peatlands. In the Delegated Ace (DA) regulation, it stated that palm-based biofuel is included in the high-risk Indirect Land Use Change (ILUC) criteria which could damage the environment and cause deforestation. The DA criteria will be reviewed in 2021 before it will be revised in 2023.

Paulus Tjakrawan, Chairman of the Association of Indonesian Biodiesel Producers (Aprobi), said that the policy was considered discriminatory because the European Commission’s policy has singled out palm oil, while other vegetable oils were excluded.

“Soy oil requires land that is eight times bigger,” Paulus said. He added that the government and oil palm companies are setting up a panel for the WTO session.

The lawsuit was filed following the assessment conducted by Indonesia that it had complied with international regulations. The lawsuit on the palm oil industry against the European Union was already made before 2018 when the Indonesian palm industry was accused of selling at cheaper prices abroad than domestic prices.

“At that time the standard used was from Germany. It turned out that Indonesia’s biodiesel could reduce emission by more than 50 percent. So the exports reached 1.8 million tons in 2014,” he said.

He said that Indonesia was accused of implementing subsidies and selling cheaper palm oil abroad. Indonesia then filed a lawsuit at the WTO in 2018. Indonesia was required to reduce the emission not only by 35 percent but almost 50 percent and it was fulfilled, he said.

Shinzo Abe, Japan’s Longest-serving PM, Assassinated
Comments
There are no comments
Comment wisely and responsibly. Comments are entirely the responsibility of the commentator as regulated in the ITE Law
Thank You! We have received your report. We will remove comments that conflict with the Community Guidelines and the ITE Law.