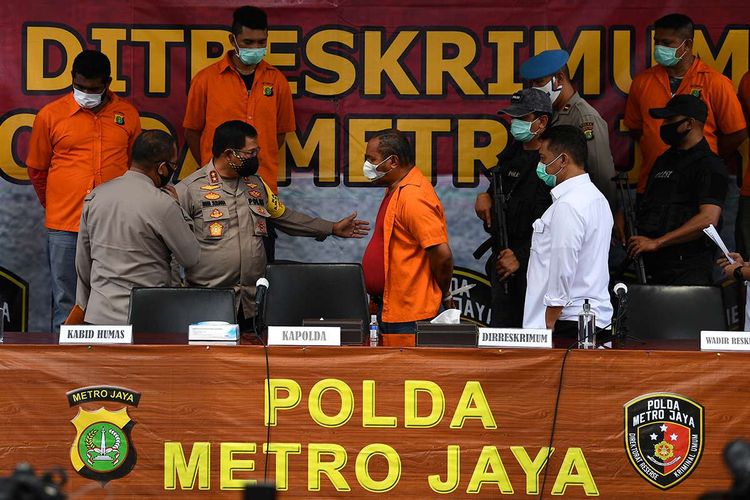 JAKARTA, KOMPAS.com – An Indonesian murder convict out on parole and now accused of overseeing the June 21 attack and murder of men associated with his own brother in Tangerang and West Jakarta was arrested on the same day.

Jakarta police nabbed John Kei, along with 29 of his men, at their home base on Jalan Titian Indah Utama X, Bekasi, West Java on the outskirts of Jakarta at around 8:15 pm.

Police said the attack on Sunday was aimed at locating the whereabouts of John's brother Nus Kei. John allegedly ordered his men to kill Nus following the unequal division of proceeds from the sale of land property, according to police. The attack allegedly occurred in two different locations namely at the Green Lake City, Tangerang and the Kosambi area in West Jakarta, said police. At the Green Lake City, they opened fire seven times causing damage in the residential gate and Nus’ house, they said.

During the incident in Tangerang, a security personnel was injured after being hit by their car and an online motorcycle taxi driver was shot in the leg. Meanwhile, the attack in Cengkareng killed one of Nus’ men known as ER and injured another person.

Earlier, the police questioned Nus as a witness. The information provided by him was the basis for the arrest of John and his men. If found guilty of premeditated murder and other charges, they could face the death sentence.

The Directorate General of Correctional Facility is still waiting for the results of the meeting between the penitentiary and the police regarding the arrest.

It will be recalled that in December 2012 John was sentenced to 12 years in jail by the Central Jakarta District Court after he pleaded guilty in the premeditated murder of PT Sanex Steel top executive Tan Harry Tantono. He was released in December 2019 on parole.

Police are currently still investigating John to find out his other roles besides ordering the attack on Sunday. “The case is still under investigation, but he is involved in terms of giving orders [to his men],” said the City Police’s Criminal Investigation Director Senior Commissioner Tubagus Ade Hidayat on Sunday, June 21.

Head of Public Relations and Protocol Division at the Directorate General of Correctional Facility Rika Aprianti said Monday, June 22 that prisoners who are on parole can be sent back to prison if they are found guilty again. However, her office is still waiting for the results from the police investigation to discuss the possible parole revocation.